Ahh 1971, a landmark year for the ‘New Hollywood’ crowd by anyone’s estimation. Billy Friedkin released his first masterwork with The French Connection, Peter Bogdanovich released what is arguably his only masterwork with The Last Picture Show, a young beardy future mega-lo-maniac made THX 1138, not to mention Altman’s McCabe & Mrs Miller, Ashby’s Harold and Maude, Monte Hellman’s Two Lane Blacktop, Alan Paluka’s Klute, Richard Sarafin’s Vanishing Point..... well you get the picture. In the midst of all this, a young California State dropout was stuck doing episodes of Night Gallery and low budget TV movies. Given a project to direct a quickie adaptation of a Richard Matheson short story out in the California desert, the youngster just happened to create a genre masterpiece, and the breakout that would soon make him the world’s most bankable director. This of course was Steven Spielberg, and the little TV Movie in question Duel.

This is hardly an early example of the Spielberg we know and erm... love? today though. Duel is instead a film with such a studied minimalist framework and structure that I feel you can comfortably place it alongside the more radical studio funded works of the period, such as the aforementioned Two Lane Blacktop.

The plot can be described within the briefest of synopses, a white collar salesman named David Mann (Dennis Weaver), is driving across southern-eastern California when he suddenly finds himself terrorised by the unseen driver of a large tanker truck. After initially toying with Mann, the truck driver begins to attempt to kill him, forcing Mann to have to eventually fight back.

This barebones approach to the plot is complemented by Spielberg’s minimal usage of dialogue, which finds itself trimmed down to exclamations of disbelief from Mann together with the occasional (and somewhat unnecessary) inner monologue. The soundtrack is equally minimalist, largely making use of the diegetic, such as the truck’s roaring diesel engine and the asinine radio talkshows that emit from Mann’s car stereo.

Whilst Spielberg himself refers to the film as a simple chase picture and nothing more, the framework allows us to place our own subtexts onto the film. Certainly European critics of the time (upon seeing the extended 90 minute theatrical European release) saw the film as variously an ‘indictment of machines’, or a film of ‘Father’s failing and women taking control’. Most famously some critics read the film as a battle of the ‘middle-class bourgeoisie vs. the working classes’. This is the thesis with which my own view of the film aligns most closely.

I personally read the film along the lines of the other road movies being made by youthful directors of the period, films which were consumed by a sense of displacement, disillusionment, and anger. I see Duel as channelling this countercultural anger into a pointed attack on the white collar Middle American bourgeois. Where most of the other road movies of this period, despite their generally downbeat tone, still managed to exude a certain romanticism towards the freedoms of the open road. Duel instead sees the road as a purely hostile and dangerous place. 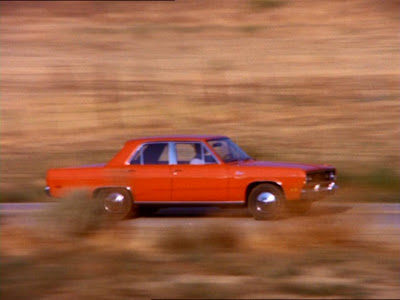 The film’s protagonist ‘David Mann’ can be seen as a stereotypical symbol of mid-scale corporate America. An everyman salesperson under pressure to meet targets, white collar, conventional tie, driving one of the best selling 4 door family saloons of the period in the form of the staidly designed Plymouth Valiant, and with a malcontent wife and two children at home in a detached house on a quiet suburban street. Weaver brilliantly embodies Mann as stuffy, uptight, a heart-attack waiting to happen and nothing if not emblematic of the revised ‘American Dream’ that the good capitalist American of the 1960s should aspire to.

If we see our protagonist as a symbol of white collar America, our antagonist, the unseen driver of the grime ridden, seemingly unstoppable juggernaut that terrorises him, can be seen as a twisted descendent of the pioneer spirit. A primal road man whose unwillingness to conform to societal values, can be seen as the corrupted offspring of Tom Joad back for revenge on a system that denied his own American Dream.

If the counterculture had taken a certain satisfaction in ironically embracing symbols of the American pioneer spirit (for example, Billy & Wyatt in Easy Rider (1969)), as defenders of the right to a spiritual freedom oppressed by modern American attitudes. Then Spielberg appears to take pleasure in turning this in its head. The displaced wanderer of the American highways is now the aggressor and oppressor, with Mann now the victim in what has been quoted as “a Kafkaesque world in which seemingly random and inescapable acts of psychological torture flourish and thrive”. 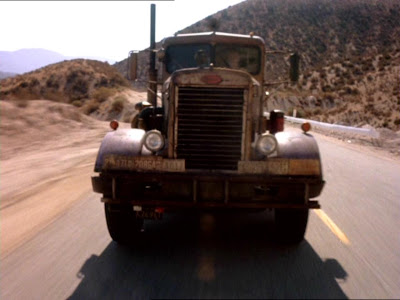 Spielberg emphasises the towering presence of the truck roaring up to Mann’s rear bumper with intimidating close-ups. Something we notice at these times is that the trucker’s front bumper is covered in licence plates from other states across the country, displayed like proud trophies from his previous victories. This destroyer of conservative normalcy and decency is gradually swallowing up the nation, picking it off state by state.

So if we can see the truck as a symbol of bourgeois fear, we can take this further and consider Spielberg’s own suggestion that, rather than Mann being scared of the trucker attacking him, it is more a fear of loss of control. This proves for the most interesting reading of the film on a contextual level. This is a Middle America scared of losing control of the stability and prosperity it had enjoyed since the economic boom of the 1950s. American conservative values were being challenged by the counterculture, political dichotomies seemingly dividing the nation in two. 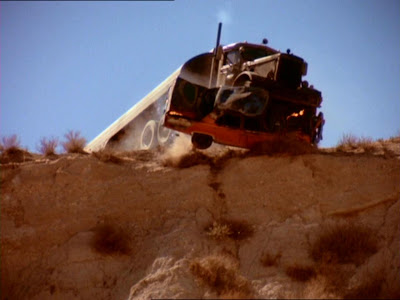 Spielberg refuses to provide any comfort for Middle America, and so the film concludes with Mann having to resort to his own sense of primal instinct, a complete ‘loss of control’ of his own restrained conservative demeanour, he can only attempt to guarantee his survival by ridding himself of his white collar symbol (his car) in order to defend against his aggressor. Spielberg suggests that Mann has had to resort to the mindset of his adversary in order to survive, resulting as Ryan Gibley has stated in the "crumpled defeat of the middle-American male".